In the past two months, Troop 111 has been in three newspaper articles.The first was published in Ojai Valley News on December 27th. It discussed a service project in December of 2018, when scouts repaired a bathroom in Rose Valley and planted a new sign. The second was published on January 8th by the city’s newsletter, is titled “Arroyo Verde Park’s Unsung Heroes”. It talks about a service project in early 2018. During this service project, scouts from Troop 111 dug water bars, which direct rainwater. The third and final (so far) news article, published by the Ventura Breeze Newspaper, talks about the same service project. An article in Boys’ Life, a magazine distributed to Boy Scouts, discussed a service project in December of 2017. The Thomas Fire had been going on for a few weeks, and hundreds of houses had already burned. People who lived a little ways uphill from Juanamaria Park were being allowed to go to their homes, which were in mandatory evacuation areas, for a short amount of time, and needed help carrying items. Troop 111 members spent a few hours helping them and handing out snacks and drinks in the parking lot of Temple Beth Torah. 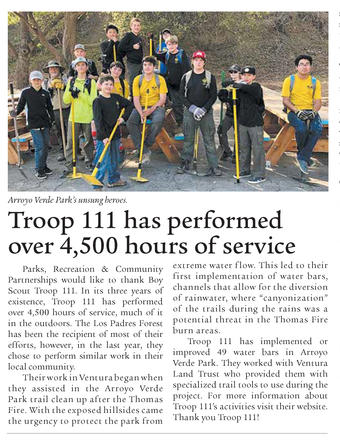